In case you have not heard about it till now, let me tell you a few things about it in brief, before we go into the HHVM vs PHP 7 tests

HHVM is an abbreviation for HipHop Virtual Machine. It was created by Facebook in 2010, with the first public version released in 2011. The main reason behind it’s creation was to save the server resources and to provide a faster web experience. It does so with the help of Just in Time (JIT) compiler, that takes PHP code and complies it into Machine code on the fly.

We tested the same WordPress site for HHVM and PHP 7 on the same server on the load Performance benchmark test at loadstorm.com. The test was conducted for upto 10 concurrent users for a duration of 10 minutes. 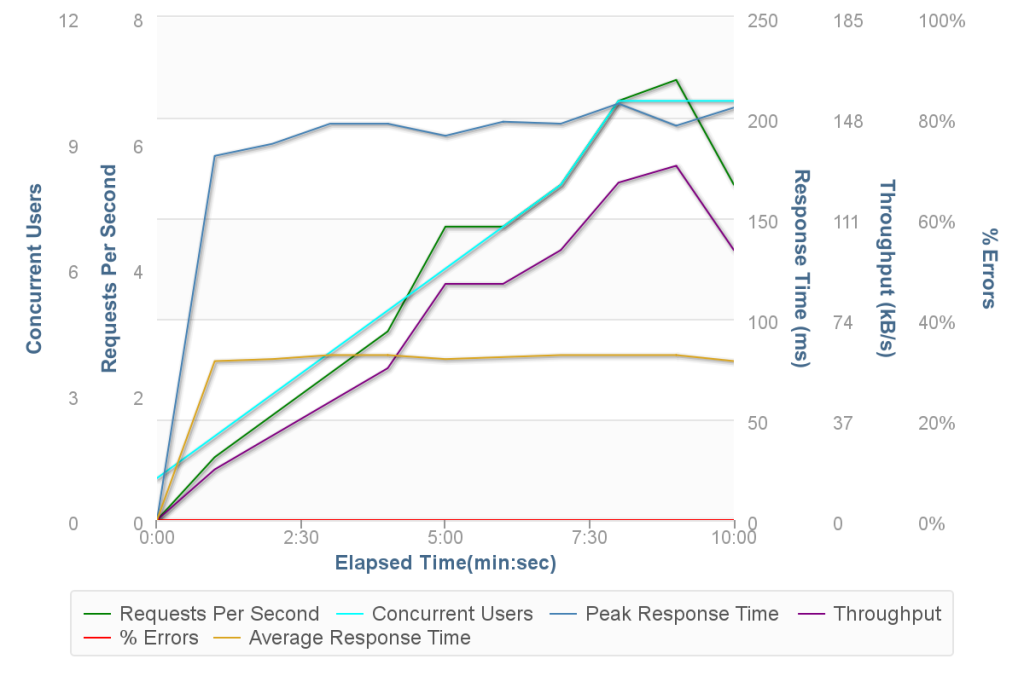 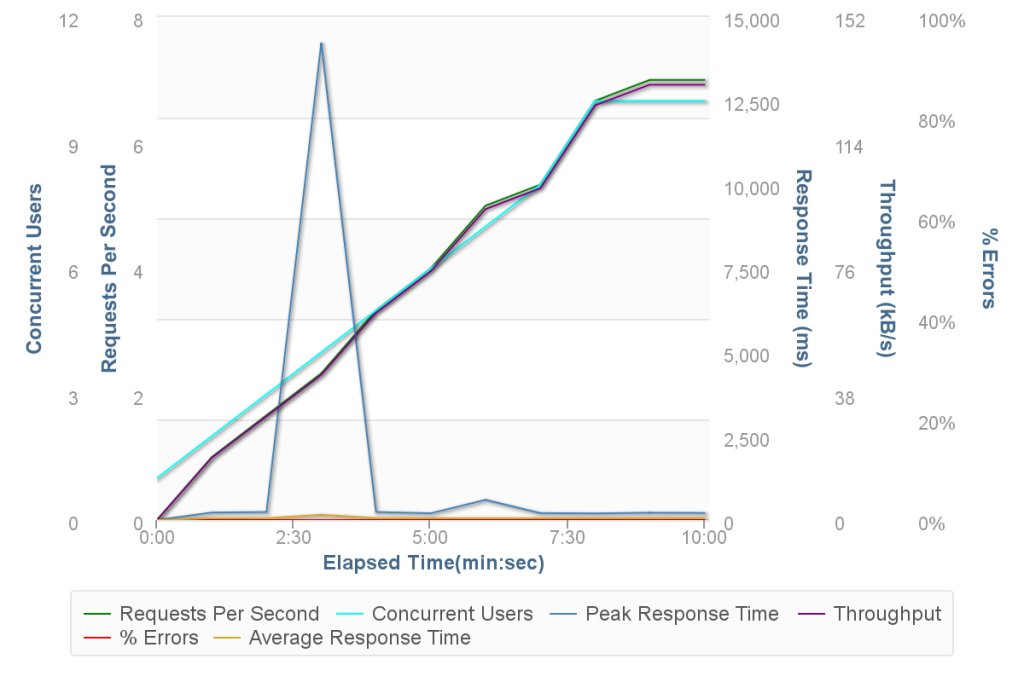 Comparing the two tests, we can see that even though HHVM was slow to start off with and got a huge spike in the response time, but after the first minute or so it caught up and even made ground to PHP 7 as it emerged the clear winner in this test.

We can see that the Avg response time for HHVM is far less than that for PHP 7, even with having such a high Peak Response Time. It’s performance during the initial part of the test was slow due to the fact that it caches the pages initially which can cause a temporary performance drop, but after that the performance picks up incredibly. 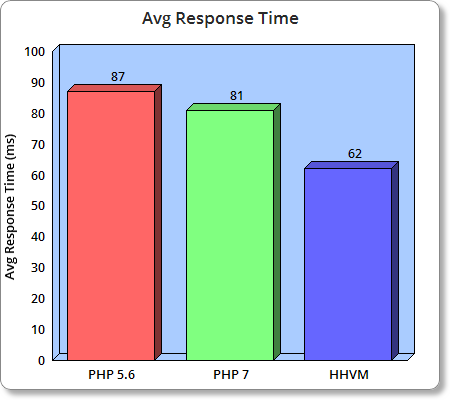 This is a simple web page speed test loading test performed at http://www.webpagetest.org/

In this test both PHP 7 and HHVM sites fared almost equally, with the later’s site loading slightly faster that the PHP 7 WordPress site. 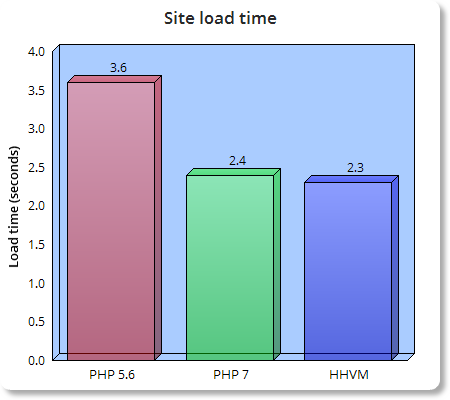 For the third and final test, we used the “WP Performance tester” plugin, which is a Performance benchmark testing WordPress plugin 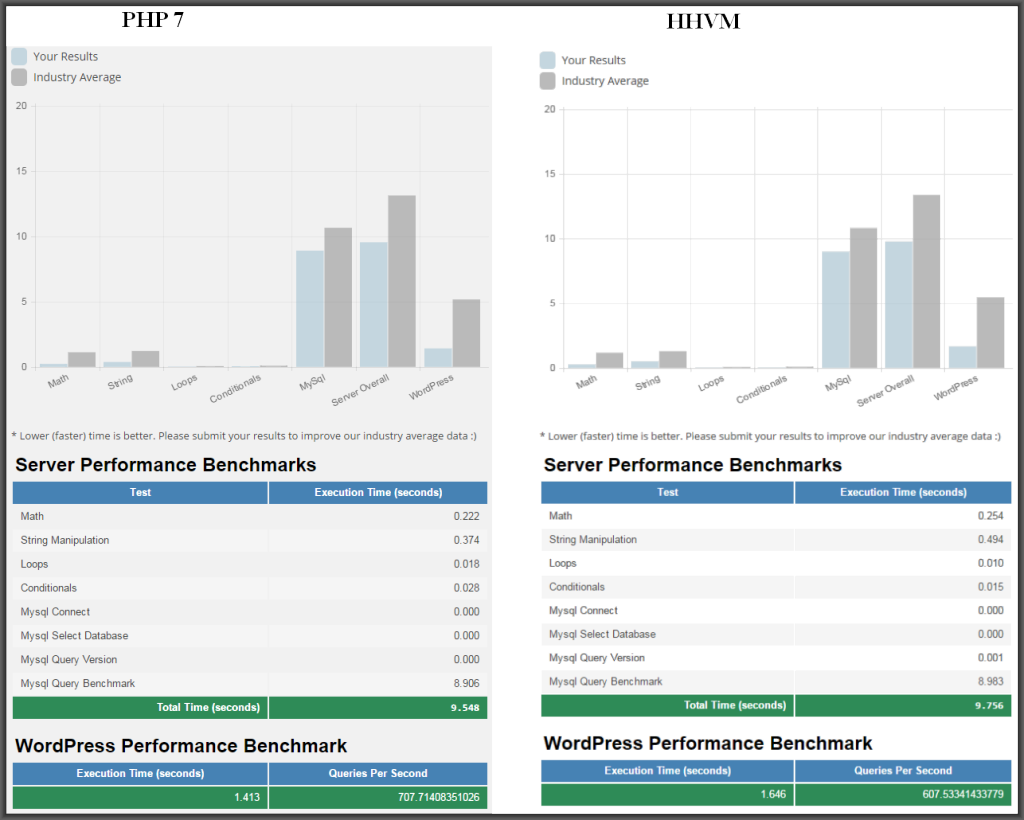 In this test we found that PHP 7 WordPress site had the edge and performed better, as we can see from the total Execution time taken by PHP 7 site was less than than that for the HHVM site and it also executed more queries per second. 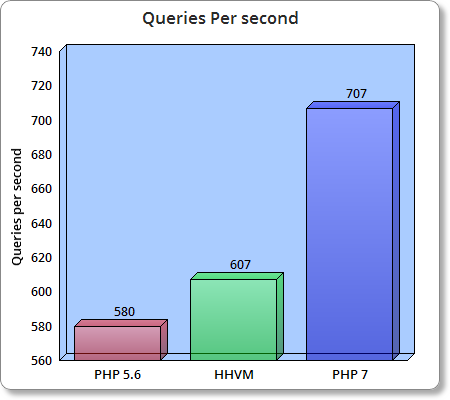 From our tests we found that though PHP 7 has caught up a lot against HHVM, from PHP 5.6, but the HHVM WordPress site still performed better for a high number of concurrent requests on the server. This is because it takes less CPU resources and thus gives a better response time than PHP 7.

That being said PHP 7’s performance was almost at the same level as HHVM for the Site load time test. PHP 7 also performed better in terms of the number of queries executed per second.

In my opinion, it comes down to what your requirements are. If you have a multi-core server that can handle HHVM without crashing or have a site which might have a large amount of concurrent hits, then it  would perform better for you. If you are looking for a stable WordPress platform for the future, which performs better than PHP 5, then you should go for PHP 7. I won’t be surprised if PHP 7 catches up to HHVM or even surpasses it’s performance in the coming days